Gustave Jacobson, the founder of our Company, worked for his parents in their small picture framing business which he renamed Jacobson & Company on March 5, 1889. While this new Company first operated as a plain plastering contractor, it quickly ascended to ornamental and decorative plastering with over eighty shop craftsman employed in its heyday.

Our installations in that period included the Pompeian Court at the Metropolitan Museum of Art (today it serves as a cafeteria), the Cloisters in Upper Manhattan, the Presidential Palace in Cuba, and many large theaters around the world. The Hearst Castle in San Simeon, California, as well as the grand residences in Newport, R.I., are included in the list of homes in which Jacobson plaster ornamentation was applied.

The Company did work for many of the leading architects of that period, such as McKim, Meade and White, John Russel Pope, and James Gamble Rodgers. During the first three decades of the twentieth century, Jacobson produced two hard cover catalogs from which ornamentation was ordered and shipped around the world. Jacobson-made ornamentation was exported to South America and Japan, where the Company was represented by W.R. Grace & Company and Matsui Company, respectively. 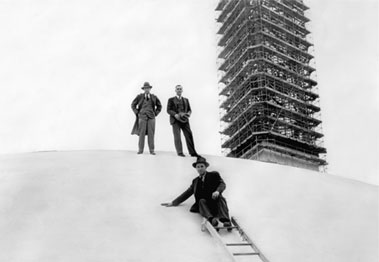 A Tradition for Impeccable Craftsmanship...

The company continued applying ornamental and straight plastering up to 1940, when ornamental design went out of style. In 1932, Gustave's son, Victor Jacobson, anticipating the changing architectural styles, entered into and became a pioneer in the architectural acoustics field as a distributor for a leading manufacturer of acoustical ceiling materials.

Jacobson is recognized as the premier ceiling and drywall contractor in the New York market. We are frequently the first choice of architects, contractors, and owners who have come to rely on Jacobson to translate complex design visions into stunning realities. We have completed thousands of projects over the past 100 plus years.